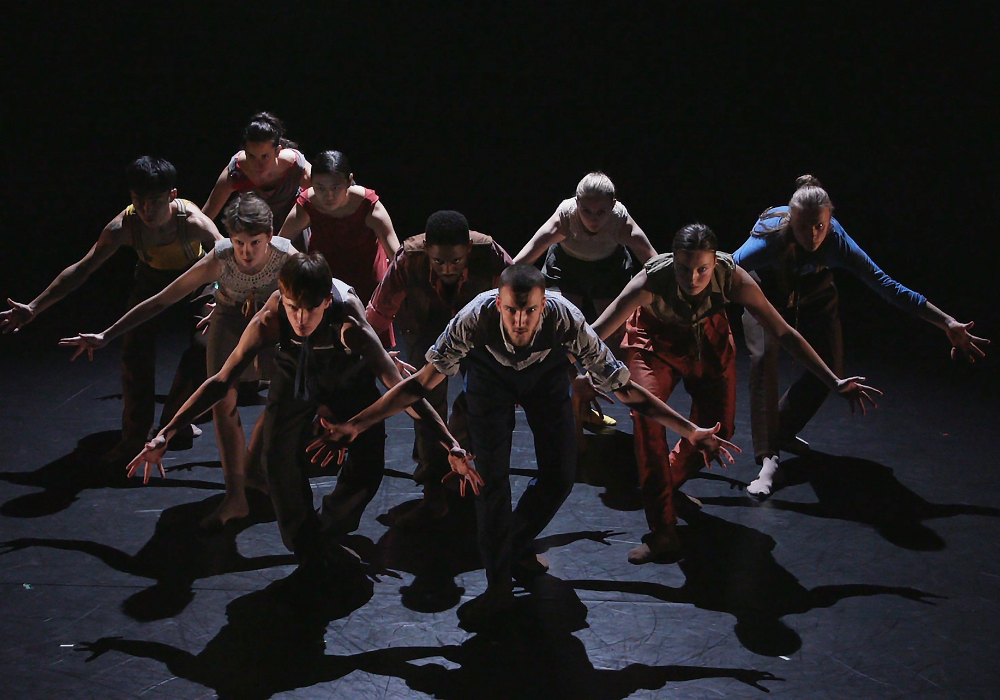 Behind the scenes News

In January, 10 exceptional young artists from 7 different countries, selected at open auditions from over 1000 dancers gathered in the UK to begin our Shechter II 2020 Programme.*

After their orientation and 6 weeks of creation and rehearsals with Hofesh and Rehearsal Director Chien-Ming Chang on a new version of Hofesh’s iconic piece Political Mother, they had just finished production week when they were told the news. Because of the growing pandemic, the premiere of POLITICAL MOTHER UNPLUGGED including performances in Paris, at Théâtre de la Ville -Théâtre des Abbesses in April were postponed indefinitely. Then lockdown was announced in the UK and the dancers returned home to their families.

Hear more from our dancers about how it feels to be back, what they learned during lockdown and what performing together for the first time in 2020 means.

How did you keep moving and keep positive during those early months in lockdown after you left the UK and returned home?

NIEK: When we returned home, we had in mind that the lockdown would last 3, maybe 4 months. I felt so eager to stay connected to the piece, so I would listen to the soundtrack of PMU every time I went to do groceries. This gave me a clear sense of purpose and a light at the end of the tunnel. After all these months apart I feel so happy to finally be able to dance and experience the piece together again. The music was great through my headphones, but it is MUCH better now…

JACK: I was very lucky to be with my girlfriend and my parents for the lockdown. We had great weather and our garden allowed us to explore new areas of movement like Acro-Yoga. Bike rides became a regular thing and I built a bike from scratch, which was a great hobby and made for an interesting change from dance. My girlfriend and I experimented with dancing early in the morning in a large park near my home. We experimented with the different areas of the park and this lead to us making a short dance film together.

Was there anything that you discovered about yourself (or others) during that time that surprised you?

EVIE: Over lockdown I learnt that spending time by myself sways me either one of two ways. One way is feeling the need to fill my time with activities, a constant race against myself for no reason. The other is allowing myself to explore and appreciate everything that free time and space has to offer. This can literally be a walk in the park, sitting on the bed listening to music, or cuddling a cat and just being content with the present moment. Having a sustainable and healthy balance of both is something that took me a while to figure out. I loved that Zoom calls became mini escapes from the gloom of lockdown. Keeping in touch with the company felt amazing, like a big family.

When you first learned POLITICAL MOTHER UNPLUGGED at the beginning of this year the world was a very different place. Has your relationship to the work changed over the course of 2020? And if so, how?

JARED: Hmmm, I’m not sure if my relationship to the work changed necessarily, but I do think it deepened over the course of this year. When we first started working in January, I think I was focused solely on fulfilling a role, the movement, and trying to do those well… and to be honest, I didn’t quite feel myself. But, having made deep connections with the company and the work, and then having that ripped away due to Covid created an emotional gap in me. You don’t realise what you have until it’s taken away from you, and I think that’s what I experienced during the lockdown months. I became incredibly attached emotionally like I hadn’t been before. I definitely feel like myself now in the work because I’ve found an emotional attachment to it. It’s an odd thing to say, but I’m grateful for the separation, and now that we’re back, I’m finding and establishing things in the piece that I hadn’t before.

Political Mother resonated powerfully with audiences worldwide when it premiered then toured in 2010 and is now recognised as one of Hofesh’s most iconic pieces. As a work about political upheaval and as a dancer performing in this new version does it still feel relevant to you now?

ROSALIA: As a dancer in POLITICAL MOTHER UNPLUGGED it feels more relevant than ever performing this work in 2020. I’m sure everyone has experienced these feelings this year but being an American I’ve felt and seen an immense amount of anger, frustration, pain, neediness, and uncertainty towards each other. With the global pandemic taking over our lives and many events leading up to the US election it’s been an emotionally heavy year. These are all emotions we experience in PMU and there are many moments where we express them towards each other and to the shouting ‘politician’ character. Having the opportunity to perform such an iconic piece 10 years later, and finding that it is still so relevant in today’s world is quite powerful, and I’m extremely grateful to be a part of that.

JARED: I think the work will always be relevant and resonate in whatever time it is living in but, for me, two of the qualities in the piece resonate very personally. The first is the unruly, unapologetic nature of the ‘entertainer’ characters, where we just go crazy and don’t give a damn – no apologies! I connect to that character now as that is a mindset I had during all the protests and Black Lives Matter movements in the States during lockdown. As a black American man I had to stand up and find that confidence and really talk about, argue and fight about these things, so I certainly connect to that character more because of what has been happening in America, where I spent all of lockdown.

Secondly, I’ve also found a much deeper connection to the ‘loser’ character – for all the same reasons in terms of BLM and the global protests. There was a certain point where I started to feel empty, soulless, and I see the piece more in a Black American way now because of having the privilege to learn it and perform it, and think about it during this time. The ‘loser’ character for me is the exhaustion of having to hide your true identity, your true blackness. There are things that I didn’t do, things that I didn’t say, when I was growing up because I was told I shouldn’t, because that didn’t fit in with the majority of the people I was around. There are points in the piece, when we are dancing the losers, when we raise our arms up, we have no questions about that, we just do it. That really connects with me – the loss of identity.

Tell us a bit about one of your roles and the costume.

NIEK: I’m one of the Samurai, and I really like the role because it’s such a different colour in the piece, and honestly, the costume is quite cool. For the opening of the piece I’m in my full Samurai gear, which always makes me feel very focused and empowered. In that sense the costume is very helpful, as I want to set the right tone for the start of the performance. A bit less helpful are all the straps, ties, and separate compartments of the costume, which makes it an absolute nightmare for quick changes.

What are you most looking forward to when you arrive in Paris?

CHARLES: Obviously Paris is where I come from so I am very impatient to be able to perform a piece that I am very proud of in my city. And being able to do it in front of my friends and family means a lot to me and gives me a pressure, which feels good.

ROSALIA: This will be my first time in Paris and I’m really looking forward to learning about the French culture, food, people and breathtaking scenery. I have to say I’m super excited to take PMU on tour and bring it alive on stage to share with a live audience!

What does the chance to perform POLITICAL MOTHER UNPLUGGED live mean to you as a dancer?

JACK: Just before the lockdown was announced we had completed our tech week for POLITICAL MOTHER UNPLUGGED. After all the time in studio, the hard work had paid off and we had a full piece ready to tour. It was such a shame to be told that it had to be put on hold just as we arrived at that point, but now, we are back in the studio again like nothing happened. I am eternally grateful to the company for doing everything they could to bring us all back together and now finally, we are about to embark on a three week run of performances in Paris!

EVELIEN: I feel absolutely blessed. You’re finally able to do that one thing that you love the most. It’s just everything that you worked hard for. Being on stage with a live audience, feels for me like I’m totally alive. It’s like cooking your favourite meal and then finally, after staring at it for such a long time, being allowed to eat it. We can finally ‘feed’ ourselves.

CHARLES: I feel really lucky and grateful to be able to perform during this period. These 8 months have been long and uncertain. But I think it made our company even stronger, and gave us a real need to get on stage. We feel it between us, and hopefully the audience will be able to feel this as well.

CHIEH-HANN: It’s so exciting. For me, I enjoy performing on stage so much. Even in Taiwan, I still tried to practice the show. To be honest, I’m so glad to be here!

EVIE: Having the opportunity to perform PMU live again especially as we’ll be seeing out the year, kind of feels like when you’re watching fireworks, and you know it’s ending because they’ll start to set off the really big and loud ones all at once, it’s like a last hurrah! A big celebration of how the arts has persevered! I feel so lucky and grateful to be able to perform live, the buzz and atmosphere from a live audience is irreplaceable.

* Shechter II builds on Hofesh Shechter Company’s commitment to developing young artists, age 18-25 years, at the beginning of their performance career by offering salaried work within professional company context.  Even though this programme offers extensive national and international touring, it’s not just about performance – it’s a full programme of professionally aligned research and development which aims to develop young dance artists who deeply understand their practice, who are engaged, curious and who embrace self-reflection.  We aim to nurture and grow proactive professionals for their future career as rounded, conscious young artists.

Political Mother premiered on 20 May 2010, at the Brighton Festival, UK.

With thanks to the UK Government’s Culture Recovery Fund Hofesh Shechter Company continues to be #HereForCulture.