Double Murder – (Clowns and The Fix)

Double Murder is a thrilling new double bill by internationally celebrated choreographer Hofesh Shechter, presented as two distinctly contrasting pieces for our times – Clowns and The Fix.  The production will open to press at Sadler’s Wells on Wednesday 15 September prior to an international tour before returning to play at HOME in Manchester in June with further UK dates to be announced.

With a sarcastic nod to our ever-growing indifference to violence, Clowns unleashes a whirlwind of choreographed anarchy, asking how far are we willing to go in the name of entertainment.

Shechter’s new creation, The Fix, brings a tender, fragile energy to the stage. It offers a human, raw and compassionate moment where violence, tenderness and hope are all laid bare through Shechter’s achingly beautiful, cinematic lens.

Double Murder is supported by the International Music and Art Foundation.

Clowns premiered on 29 April 2016 at Nederlands Dans Theater 1 in The Hague, The Netherlands. 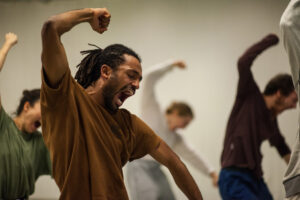 Following a year of cancelled tour dates in 2020, Shechter II returns to embark on a European tour prior to playing dates in the UK from October through to November at the Lighthouse Poole (Oct 5), Home, Manchester (Oct 27-30), Battersea Arts Centre, London (Nov 3-5) and Dance East in Ipswich (Nov 25-27) with further dates to be announced.  See current tour schedule further down.

Performed by Shechter II, who represent the very best of the next generation of contemporary dance talent – this live stage production will invoke the ferocity and spirit of the original in a new era and for a new generation of dancers, selected from the most inspiring young artists across the globe.

POLITICAL MOTHER UNPLUGGED will draw you into a world of visceral emotion and intense sensations, driven by Shechter’s contagious tribal movement and the dancers’ extraordinary skill and honesty.  Danced to a bespoke, new recording of Shechter’s music and accompanied by a landscape of designed, digital animated projections, this will be a dance experience like no other. 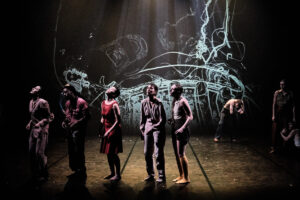 The original Political Mother premiered on 20 May 2010, at the Brighton Festival, UK.

In 2018, the apprentice company of Hofesh Shechter Company, Shechter II, was established. Shechter II is a biennial, paid, talent and career development programme for 18-25yr olds. It is designed to nurture young artists at the beginning of their performance career and successfully combines training and mentoring elements with the demands of a full-time touring company. The programme, which was successfully piloted in 2018, not only provides young dancers with a guided pathway into a career as professional performers, it also creates high-quality touring opportunities, for which there is demand from smaller venues in the UK and internationally.

The eight dancers of Shechter II 2018 successfully performed Hofesh Shechter’s SHOW to audiences worldwide, for which they received the 2017 / 2018 Prix de la critique award for Meilleurs Interprètes – Best Performers at Théâtre de la Ville – Paris, where they had 29 sold-out performances over two seasons.

They also took part in East Wall, a large-scale spectacle of dance and live music at the Tower of London, in partnership with East London Dance, Historic Royal Palaces and LIFT, rated one of the best dance moments of the 21st Century by The Guardian.

In 2020 the international dancers of Shechter II, who were selected from nearly one thousand applicants, created a potent new version of Shechter’s  iconic masterpiece Political Mother, POLITICAL MOTHER UNPLUGGED, which was live streamed during lockdown at Théâtre des Abbesses, Paris and in 2021 returns to theatres in the UK.

With thanks to the UK Government’s Culture Recovery Fund Hofesh Shechter Company continues to be #HereForCulture.